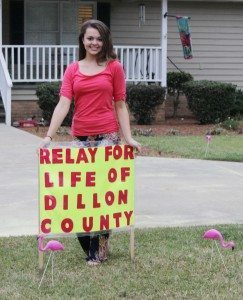 Dillon native Aubrey Goodwin will depart for Columbia on June 18 to begin her quest to become Miss South Carolina Teen.
The Miss South Carolina Teen pageant is a part of the Miss South Carolina Organization and the Miss America’s Outstanding Teen pageant. Goodwin, 14, attends Darlington High School, due to both of her parents working in the Darlington County School District, and was crowned Miss Darlington High School Teen in November 2015.
When she won she had never competed in a pageant before and made history by being the first freshman to ever win the Miss Darlington High School title. With the graces of Darlington High School principal Dr. Greg Harrison, Goodwin was given the opportunity to compete for the Miss South Carolina Teen title.
This year she has dedicated her year of service to her platform “Standing Up Against Cancer” which was inspired by her losing her best friend to Leukemia when she was 10 and her grandmother who currently has stage 4 cancer.
“One thing I have enjoyed the most in preparing for the pageant is being able to participate in community service and spread awareness about my platform, Standing Up Against Cancer around the communities of Darlington and my hometown of Dillon,” Goodwin said.
Goodwin has participated in numerous activities this year including the Dillon Relay for Life, the Darlington Christmas Parade and the Coker College Homecoming Parade, the Special Olympics, spoke to the Darlington Kiwanis Club and Dillon Pilot Club and the Taste of the Falcons just to name a few, she made over 30 appearances this year.
She was even named the Darlington High School Freshman Chorus member of the year and was featured as the   Student Spotlight winner from Darlington High School on a local television station.
She will present a vocal selection for her talent this year.
“The Miss SC Teen and Miss America Organization has changed my life because it shows me the bigger picture in life and if I set my mind to something it can happen with hard work and dedication,” Goodwin said.
Goodwin will compete in her private interview on Monday afternoon June 20, her talent on Tuesday evening June 21, her evening gown and on-stage question on Tuesday evening June 22 and physical fitness on the evening of June 23.
The finals of the Miss South Carolina Teen pageant will be held on June 24 at 7 p.m. and can be viewed at www.miss-sc.org. The event will be held at the Township Auditorium in Columbia.