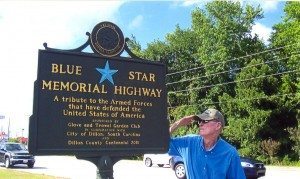 For the Dillon Centennial, The Glove and Trowel Garden Club’s project was the purchase of a “Blue Star Memorial Highway Marker.” A Dedication Ceremony was held at the City of Dillon Wellness Center on April 16, 2010, and the marker was then placed at the Dillon Triangle of Flags Median where Highway #9 and Martin Luther King Boulevard intersect. The marker program of the National Garden Clubs, Inc. began in 1945 to honor the men and women serving in the Armed Forces during World War II. It now includes all who served, are serving, or will serve.
Recently, our Garden Club received a letter from Robert “Bobby” McIntyre of Dillon expressing his appreciation for this Marker stating that each time he rides by there he thinks of our Veterans who are being remembered and honored by the marker being there, and that for some time he had wanted to show his appreciation to us for placing the marker.  He enclosed a donation marked “A GIFT WITH LOVE” stating “You couldn’t have had a better one (project) when you chose to place the marker.  As a Veteran myself, I say “TH ANK YOU.”NOW, our club would like to tell you something about Bobby McIntyre:
“Robert W. (Bobby) McIntyre was born in Marlboro County, SC on April 13, 1927.  His parents, DeWitt Talmadge McIntyre and Bernice Hamer McIntyre were the parents of six children with Bobby being the youngest son.  His family farmed and Bobby’s father kept getting him deferred from the draft so he could help with the family farm.  His two other brothers were already in service and his father needed him at home.
One of Bobby’s neighbors (Alan Plummer) was killed in Korea and Bobby told his Dad he had to go serve and he joined the Army November 16, 1950.  When asked where he wanted to serve, he asked to be sent to Korea.
Bobby served in Korea with the 72nd Tank Battalion which was attached to the 2nd Infantry Division.  He worked as a C.W. Radio Operator in communications.  He was involved in the battles of Bloody Ridge and Heartbreak Ridge.  He was honorably discharged on August 15, 1952 with the rank of Sergeant.
After leaving service, he farmed a few years and later was owner of McIntyre Insurance Agency in Clio, S.C.  He was a member of Trinity Methodist Church in Clio for seventy years, but now is a member of First Presbyterian Church in Dillon, S.C.
He was first married to Frances Maxwell McIntyre for 43 years and they had two sons, James T. McIntyre and Robert W. McIntyre, Jr.
After the death of Frances in 1995, he married the present Martha A. (Polly) McIntyre on October 2, 1997 and they live in Dillon .
NOW, the Glove and Trowel Garden Club would like to say to Bobby:  “With love and appreciation, we thank you and all Veterans who have served and sacrificed so much for our Country.”  May God Bless Each of You and the USA!