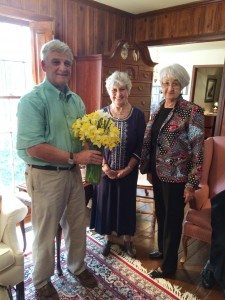 After refreshments, Program Chairman Amanda Morrell introduced her uncle Keith Allen who presented a program on current legislative issues affecting our community. Keith Allen is a sixth generation farmer in Dillon County; he stays highly involved in local politics. He also currently serves on the SC State Farm Bureau Executive Committee and the SC State Farm Bureau National Legislative Committee. Keith wanted to begin the discussion with an anecdote about the importance of women in agriculture. His family farm is known as Betty Allen Farms, a name that comes from Keith’s great aunt. Betty not only took over the farming operation upon her father’s death, she also raised Carroll Allen after his parents were struggling to care for a sick sibling. After that child passed away, Carroll decided he wanted to stay with his aunts Betty and Jane and grew up on the farm that he would one day take over. Betty was the matriarch that kept the farm going and raised the future patriarch of the Allen Farm and family.
Keith often travels to both Columbia and Washington D.C. to meet with legislators such as Congressman Tom Rice, who Keith spoke very highly of.
He shared with the ladies that our rural highways, estate taxes, the Farm Bill, trespasser laws and the Clear Water Act are current hot button issues on his radar.
The ladies thoroughly enjoyed Keith’s conversational approach to local political issues.
The business meeting was called to order by President Casey Pitts, and the meeting minutes from February were approved. Treasurer Greene reported that the club was doing well financially. Springfest will be held April 18th so the ladies discussed set up and take down logistics. Beth Greene is ordering more knives for the sale, and Dollie Morrell will be ordering a container garden from Dale Williamson to raffle off during the festival. The ladies decided to continue selling baked goods and any bulbs they may have to offer from their gardens. Amanda Morrell gave an update on the Legacy Tree Trail including inviting all to attend the 6 p.m. meeting occurring the same night at Latta Elementary School. The goal is to place the final order for the trees by April 1st. Clean-Up Day for the Belva Finklea Garden will likely take place on April 11th but final coordination needs to occur with the Town. Birthday wishes were extended to Bettie Carmichael and the meeting was adjourned.