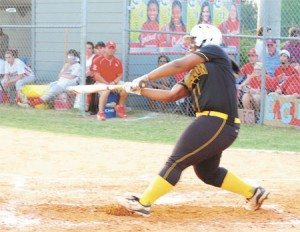 Dillon’s #55 Shaquailla German hits a solo home run in the top of the sixth inning in game two of the 2014 State Championship series. (Photo by Craig Brown.)

Dillon’s Lady Wildcats claimed their first ever state championship in softball last season, and with much of the championship team returning this year, the Wildcats should be eyeing another run at the title.

“Five starters graduated,” Head Coach Shirl Carter said, “but we have a very talented group of players come up form the JV team and several of those have varsity experience.”

German had 38 hits last season with 12 doubles, four homers and 38 RBI at bat, and pitched 85 innings for 12 wins on the mound with a 1.73 ERA, striking out 40 batters. Bailey had 37 hits with four home runs and 27 RBI last season, and Smiling had 27 hits with seven doubles, 14 stolen bases, and 17 RBI. Da’Kerhia Samuel had 34 hits for the Wildcats last season with a .410 average and 22 RBI, and Shar’Asia Samuel had three triples with 11 stolen bases.

The Wildcats finished last season with a 24-6 record, the Region 8-2A title, the District VIII title, the lower state championship, and their first ever state title. But it was sometimes a rough road for the Wildcats, who were sent to the elimination bracket in both the district and lower state playoffs, battling their way back to the title games to win twice over Aynor, 9-5 and 11-1, and Waccamaw, 8-5 and 12-2. But the Lady Cats swept Central in the state championship series, 6-2 and 8-2.

Carter expects Waccamaw to be Dillon’s biggest obstacle. Dillon defeated Waccamaw 3-2 and 1-0 in the regular season last year, but fell 8-5 to the Warriors in the first round of the lower state playoffs before defeating them for the lower state title.

Aside from Waccamaw and Aynor, the rest of Region 8-2A includes Marion, Mullins, and Loris. The Lady Wildcats went undefeated against all three last season, earning shut out wins over Mullins and Marion. Dillon will open region play on Tuesday, March 17, at home against Loris.

Carter, who has over 25 years of coaching experience with 11 years as the Wildcat head coach, is joined on the coaching staff this season by former Lady Wildcats Rebecca Callahan and Taylor Price. Both assistants played on last year’s championship team, with Callahan getting 44 hits, 30 RBI, and 12 stolen bases, and Price pitching 76 innings for 10 wins and a 1.57 ERA.

“We will be working every day in practice to get better and find our best defensive and offensive lineup,” Carter said. “I expect this team to go very far and get better every day.”

Dillon is scheduled to play in the Pee Dee Pitch Off at Freedom Florence this weekend, and will open the regular season at home against Lake View on Wednesday, March 11.