As I sat in what would be my home away from home for several days, I heard the sound of horns honking, engines roaring, and tires spinning on the very busy street that ran parallel to the hotel where I stayed.  My journey from the United States to India had been a long and exhausting one — from Myrtle Beach to Atlanta, to Dubai, to Hyderabad, and finally to Vijayawada. 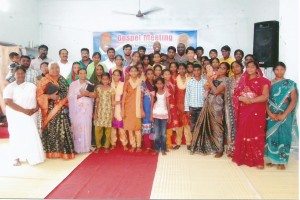 I had flown half-way around the world.  I was in a city of well over five million people who they (the Indian officials I met in Hyderabad) told me was a small city.  This visit was actually my second time being in India since I had visited there seven years ago.  However, there seemed to be something different either about this city or perhaps about me.  One thing I noticed was the cows that roamed freely, due to the ancestral beliefs and superstitions of the masses, as if they owned the place.  It is hard for me to grasp the irony and idiocy of this culture and religious reality.  All that steak, hamburgers, and stew beef roaming freely with so many destitute and hungry people watching them and forbidden by conscience and conviction to slaughter and eat them.  If I had to be a cow, I would certainly enjoy being one in India.  If there is a place on earth where cows are treated like royalty and in many cases better than people, it would have to be in this part of India.  This is a fascinating and intriguing land that is steeped in history and tradition.  It is a culture of diversities and stark contrasts.  On one hand, it is a country with many innovative and creative technological advances that are reputed to be one of the top ten in the world in scientific research.  It is a country of great wealth and entertainment that can boast of being the movie making capital of the world due to Bollywood’s overtaking of Hollywood in its numerical production of movies.  Nevertheless, in spite of all these positive, promising and progressive sides of India, it is also a country of much poverty, illiteracy, and stagnation for untold millions who were not born in a certain cast or family.  It is a country of underdevelopment, dilapidating buildings, deteriorating infrastructure, and archaic living conditions for urbanites and many who live in the rural areas that are not truly a part of the emerging and modernized section of India.  My observation and assertions are not derived from criticism or judgementalism of this ancient land that has a population of well over one billion people.  I am in no way attempting to paint a negative picture of this nation that has made great strides in many areas in the past thirty or so years.  These advances have definitely postured India into a position to take the next step toward education and equality for all of its people.  One of the things that have endeared India to me is its people, especially those who I have been fortunate enough to meet and to befriend.  I have discovered that these precious people, who for the most part belong to what is referred to as the “low cast”, are some of the most loving and hospitable people that I have ever met in my international travels.  They are willing to give you their best and their last.  This is a noble quality that is quite rare in our American culture.  They are not only generous, but grateful people who seem to possess an ability to take a little and make it go a long way.  My eyes swelled with tears as the pastor who hosted us attempted to offer an apology for his very small, three room house where we had been invited to have a meal.  I quickly assured him that the love and hospitality that he and his wife had given us was priceless and far more important than the size of his house and any other tangible thing they could have offered.  Furthermore, I stressed, “If these things were important to us, then we would not be worthy to enter your home and would be so unlike Christ.”  At these words, a big smile came upon his face and the pain and shame of feeling unequal and unworthy of our presence in his minute and modest house had been completely dispelled.  Consequently, we were able to fellowship and feast of the very delicious meal that consisted of fish, prawn (shrimp), and chicken that was smothered with a spicy Indian gravy.  These people, most of who were born into the poverty and stagnation of the lower cast, in my estimation, are India’s greatest asset and treasure.  Through the grace of God, many have been able to escape the confinement of their cultural limitations and reverse the generational curse of their natural heritage.
When and if I return to this land of over a billion pseudo deities, this land of stark contrasts, complexities, and human congestion, it will be due to the love and hospitality of these friendly and humble people with little or no material wealth.  What will draw me back will be the intangibles, the things that they possess and so freely give; the priceless things that money cannot buy.  It is in these things that I have truly struck it rich and discovered a treasure more precious than gold.

Every immigrant who comes here should be required within five years to learn English or leave the country.
Theodore Roosevelt
Fishes live in the sea, as men do a-land; the great ones eat up the little ones.
William Shakespeare
+81
°
F
H: +81°
L: +58°
Dillon
See 7-Day Forecast