Dillon Congregational celebrated its 40th Anniversary of service to our community on Sunday, November 2, 2014.
The morning service began with greetings and a congregational song selection by Paul Johnson. 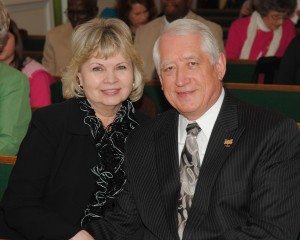 Wyman Bethea made the morning announcements followed by The Congregational Choir ministering through song.
Special guest, Sheriff Major Hulon was in attendance with his wife and members of his family, and shared comments on the church’ contributions towards bettering our community.
Another special guest in attendance was the late pastor Lamar Hardwick’s wife, Amanda, and her sister, Hazel Stephens. Both are the siblings of the late Mr. and Mrs. Harold Gene Jackson whom previously owned and sold the land that the church properties now reside.
A special plaque was presented by John Webster Bryant on behalf of the church to pastor John L. Bryant Jr. and wife Sarah for their 40-years of service.
A video clip was then shown to the congregation of the church’ properties progression as well as a partial vision of pastor Bryant’s possible future church.
A special digital flash-drive offer was then presented by James W. Bryant to the congregation of 40-years of church historical archives that included over 10,000 photos, nearly 400-song performances and 2,000 sermons.
Special singer Kelly Williams then performed the song entitled, “When He Comes Down.”
General Executive, Bishop Ronald Wilson of the Congregational Holiness Church Inc., then gave the morning message on a subject entitled, “The Battle Is Not Mine.”
A luncheon then followed in the church gymnasium.
The evening service concluded the day of events with a concert with gospel recording artist, “The Oxendines.”