The Latta Rotary Club announced the 2015 Citizen of the Year.  The Honoree is Harold David Snipes.  He is the son of Loyd and Vera Lee Byrd Snipes. 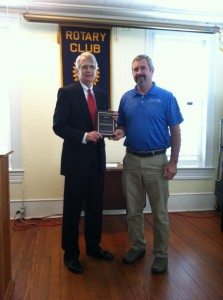 Snipes grew up in the community of Floyd Dale, starting school there and later transferred to Latta High School, where he graduated. Snipes grew up in a farming family and continued to farm on his own for many years.  Some years earlier in his career, Snipes worked for the Town of Latta for five years in the water department.   In 2012, at a very crucial time, the Town of Latta was blessed to have Harold David Snipes return as the Utilities Director time.  To say that he has been a true servant to the community is an understatement.  The Latta Rotary Club congratulates Mr. Snipes on this distinguished recognition.

Life is what happens to you while you’re busy making other plans.
John Lennon
Patriotism is supporting your country all the time, and your government when it deserves it.
Mark Twain
+81
°
F
H: +81°
L: +58°
Dillon
See 7-Day Forecast