PEARL HARBOR, HI – The retired USS Missouri, berthed in historic Pearl Harbor as the Battleship Missouri Memorial, announced that Julea Rae of Dillon has enlisted to be Montana’s “Battlehead” ambassador for the Missouri’s new Ship it Forward Facebook® contest. 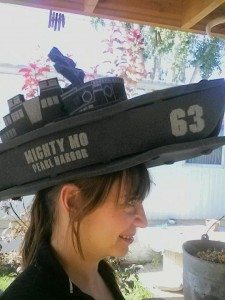 America’s last and most famous battleship and the site where World War II ended on September 2, 1945, the gigantic “Mighty Mo” is nearly three football fields long and stands 20 stories tall from keel to mast. Today, the USS Missouri is berthed bow-to-bow to the sunken USS Arizona, creating a stirring bond between the two battleships signifying the beginning and end of World War II for the U.S.
“We’re excited to welcome aboard Julea as Montana’s Battlehead ambassador and thank her for sharing the Mighty Mo’s story in her community and with her Facebook friends,” said Jaclyn Hawse, Director of Communications and Business Development for the Battleship Missouri Memorial. “The USS Missouri is a national icon and we look forward to welcoming our contest winner to walk its decks, stand where World War II ended, and hear about the ship’s incredible history.”
The Ship it Forward contest is open to participants in every state and is centered around the Missouri’s eye-catching new “Battlehead” foam headgear, designed in the shape of the Mighty Mo (image below), with the grand prizewinner and a guest receiving a gift certificate for round-trip airfare to Honolulu. By becoming the first to sign up from Montana as an ambassador, Julea has been given a complimentary Battlehead.
Julea submitted her contest entry by taking a photo wearing the Battlehead in her hometown (see photo), posting it to the Missouri’s Facebook® page using the hashtag #shipitforward and hashtag of her home state (#Montana). Like other ambassadors nationwide, Julea is taking her Battlehead and “shipping it forward” to friends and family and encouraging them to post their own entries. Entrants from the state posting the most Battlehead contest entries to the Missouri’s Facebook page will become eligible for the grand prize drawing. Contest entries are being accepted until October 22, 2014, with the grand prizewinner announced October 27.
In addition, one prizewinner will be selected from the entire pool of participants to receive a $100 gift card to the Battleshop, the USS Missouri’s gift store. Battleshop products and Battleheads can also be ordered online at http://bb63.stores.yahoo.net/.
No purchase is necessary to enter the contest, which is open to all legal U.S. residents, age 18 years and older. Official rules and prize descriptions can be found at http://tinyurl.com/mno2v7t.

I think science fiction helps us think about possibilities, to speculate - it helps us look at our society from a different perspective. It lets us look at our mores, using science as the backdrop, as the game changer.
Mae Jemison
The superior man understands what is right; the inferior man understands what will sell.
Confucius
+81
°
F
H: +81°
L: +58°
Dillon
See 7-Day Forecast