The Fork Women’s Club held its September meeting at the home of Jean Anderson. 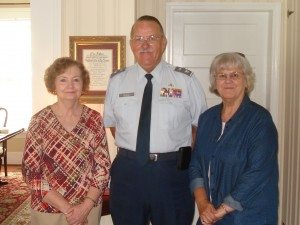 Program Chairperson Coleen Harlow introduced her first cousin, Civil Air Patrol  Colonel Hartsell Rogers.  Colonel Rogers’ bio includes that he has been a pilot since the mid 1970s and has been an active member and volunteer of the Civil Air Patrol since the mid 1980s when he revived the Marion Squadron.
He served as the Marion Squadron Commander and later was named Group Commander.  He went on to serve as Chief of Staff and Vice Commander before serving as Wing Commander from 1995 through 2000.
He served a brief time as Region Vice Commander before becoming the South Carolina Wing Director of Operations until 2013.  Colonel Rogers currently serves as the Wing Coordinator and Primary Point of Contact for the Air National Guard and Military Operations.  He remains active in squadron flying with more than 5,000 hours holding both private and commercial instrument and flight instructor ratings, as well as multiengine commercial and instrument ratings.
Colonel Rogers began by saying that the Civil Air Patrol had its beginning as early as the 1930s and was officially instituted a week before the infamous Japanese attack on the Pearl Harbor Naval Base.  Pilot volunteers used their planes and flying skills for the defense of America and performed critical wartime missions.
Civil Air Patrol pilots were assigned to the (then) War Department under the jurisdiction of the Army Air Corps.  Their duties included logging more than 500,000 flying hours, sinking two enemy submarines, and saving hundreds of crash victims during World War II.  After the war, a thankful nation saw the Civil Air Patrol continue to serve and in 1948 Congress passed legislation permanently establishing the Civil Air Patrol as the auxiliary of the new U.S. Air Force.
Three primary missions were set forth at that time: aerospace education, cadet programs, and emergency services.  The proud legacy of the Civil Air Patrol continues today as the Civil Air Patrol handles 90 percent of inland search and rescue missions, with approximately 75 lives saved each year.
Civil Air Patrol members are generally the first on the scene transmitting satellite digital images of the damage within seconds and providing disaster relief and emergency services following natural and manmade disasters, including such phenomena as 9/11, Hurricane Katrina, Texas and Oklahoma wildfires, tornadoes in the south and central U.S., North Dakota flash flooding and the October 2006 earthquake in Hawaii, as well as humanitarian missions along the U.S. and Mexican border.
In addition, Civil Air Patrol volunteers are dedicated to counterdrug reconnaissance and to teaching a new generation about aerospace and its impact on our future. And Civil Air Patrol cadet programs ensure Civil Air Patrol youth receive some of the finest leadership training the nation has to offer.
Unlike the Civil Air Patrol founding fathers, many of whom flew their own airplanes and performed life-threatening missions without any formal training, the more than 60,000 member volunteers are now provided with top-notch, year-round professional development training opportunities and with aircraft equipped with the most advanced technologies available for search and rescue.
Indeed, the Civil Air Patrol makes a huge impact each and every day, going above and beyond to make a profound difference in America’s communities. Vigilant Civil Air Patrol volunteers, save lives and help preserve liberty for all.
Colonel Rogers closed his remarks by saying that persons wanting to know more about the Civil Air Patrol can go online to www.gocivilairpatrol.com.
Mrs. Harlow thanked Colonel Rogers for his remarks about the Civil Air Patrol and presented him with a small gift from the Fork Women’s Club.

END_OF_DOCUMENT_TOKEN_TO_BE_REPLACED

Evil cause, evil effect
Japanese Proverb
Animals are such agreeable friends - they ask no questions; they pass no criticisms.
George Eliot