“The FAIR” is an event sponsored by The Garden Club of South Carolina, Inc. each year for Club Presidents and members to meet and greet GCSC Officers, Committee Chairmen and see their displays, District Directors, and other garden club members from across the State.
Each Club President receives an Information Packet which will be helpful in planning programs for the coming year. 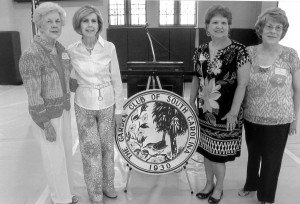 On Saturday, June 14, 2014, “The FAIR” was held at the Trinity Episcopal Cathedral’s Trinity Center Averyt Hall on Marion Street in Columbia, SC. (The first organizational meeting of the GCSC was held on April 22, 1930 at this Cathedral.)
After registration from 9:00 am – 9:30 am, we were welcomed by our GCSC State President, Judith J. Dill, from Camden whose theme is “Inherit the Past: Create the Future!”
There were three workshops: Awards – led by our 2nd Vice President and Awards Chairman, Donna Donnelly; Landscape Design Council Workshop – led by our Landscape Design Council President, Marie Land; and SC Judges Club Workshop – led by our GCSC Parliamentarian and SC Judges Club President, Pat Abercrombie. At our General Meeting, Jane Riddle Pearman, Chairman of our statewide project “Historic Trees for Historic Places,” and her committee gave a HTHP presentation and showed slides of some of the beautiful oak tree submissions received.
National Garden Club Awards were presented by Donna Donnelly, Awards Chairman, and President Judith Dill. Money received from the Silent Auction items will be used for our NGC/SAR, 2015 Convention sponsored by GCSC on March 22-24 at the Marriott Resort and Spa, Hilton Head, South Carolina. The Garden Club of South Carolina, Inc. will hold its 2015 Convention celebrating its 85th Anniversary at “The Marriott Charleston” on April 23rd, 24th, and 25th in Charleston, South Carolina.
The meeting adjourned after closing remarks by President Dill.
Attending from Dillon were: Fay Sloan (President) and Julie Sawyer (Vice-President) from the Glove and Trowel Garden Club, and Cathy McDaniel (President) from the Yellow Jessamine Club.