On Sunday night, June 29, Latta Baptist Church was pleased to host a concert that came together via social media.
Faye Jackson, who is fighting cancer, continues to encourage others and point them to her Lord.
In many of her posts on social media, she’ll end it with the words “The Anchor Holds” which is the title of a song that is dear to her heart. The author of the song heard about Faye and her posts  and contacted her.
His name is Lawrence Chewning and he lives in Florence. Lawrence agreed to come to Latta to play and sing some of his songs including “The Anchor Holds.” 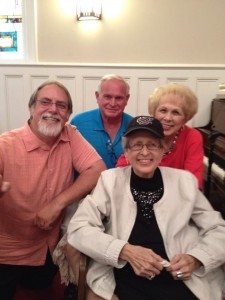 It was a wonderful worship service that featured Faye, her sister Judy Gardner, and Bill Howell singing as a trio. Bryan Rodgers, from Marion, also sang a solo and Lawrence Chewning presented several songs that he had written.
Chewning told the story of how he wrote “The Anchor Holds” in the basement of his home. The song originated from his heart due to some personal struggles he was facing after he and his wife had a baby die prior to his birth, and Chewning’s Father died shortly thereafter.
In his grief, he wrote the song “The Anchor Holds”. Recording artist Ray Boltz found out about the song and insisted that his record label allow him to put it on his album, although the record label was reluctant. Soon after it’s release, it was the #1 gospel recording for several weeks.
When Lawrence Chewning gave the history of the song, he then began to sing it and Faye Jackson, discharged from the hospital earlier that day, stood up to sing it with him. There wasn’t a dry eye in the packed out sanctuary!
In closing, Chewning told Faye, “Either way you win. If God takes you home today, you win. If He allows you to stay here another day, you win!” It was a great night of singing, prayer, and praise as everyone recognized that this life on earth is temporary and that we are created for eternity!

He that can have patience can have what he will.
Benjamin Franklin
First they ignore you, then they laugh at you, then they fight you, then you win.
Mahatma Gandhi
+81
°
F
H: +81°
L: +58°
Dillon
See 7-Day Forecast