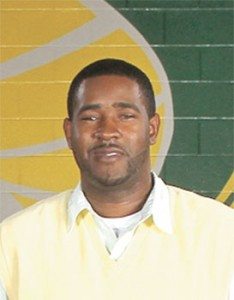 Latta’s Chris German has been promoted to boys’ basketball coach.

German replaces Coach Tony Whittington, who is stepping down after six seasons. German has served as an assistant coach to Washington for the last seven years and was the Latta Middle School coach for four seasons before coaching the junior varsity team for the last three. German earned a 40-14 record as Middle School coach, and a 22-6 record in junior varsity basketball.

German attended Latta High School and was a member of the 2001 state championship basketball team. He graduated from Francis Marion University but did not play while attending college.

German is already looking ahead at the coming year. The Vikings lost their leading scorer, Tyrell Sabb, as well as their leading rebounder and blocker, Donell Stanley, and top defensive player RJ McClam. Latta finished second in Region 8-A, but fell in the first round of playoffs.

“We will rely heavily on the younger talent on the team with returning juniors Diez Mungro, Kartilus McFadden, and Jordan Simms, who all played significant minutes on varsity last year,” German said, adding that there will be some rising junior varsity players joining the team as well.

German said he also plans to add Chris Page, a former teammate and stand out athlete from Latta, on staff next year. Page assisted both Whitfield and German this season.

German said his strategy for the season will be the same strategy he always uses: “Make this journey more than about the game of basketball.”

“My main goal here is not to just win 20 state championship s and 1,000 games. I want every single player that plays under my leadership to graduate and go off to be successful in whatever endeavors placed in their paths,” he said. “If we happen to come across a couple of state championships, that would be great, but I’m focused on life after basketball, championships, and graduation.”

German said his philosophies for his program will be very simple. “Discipline and defense,” he said. “If you can’t, then you won’t. You will have to discipline yourself on and off the court and commit to playing defense. If you can’t commit yourself to do those things then you won’t play.”

He added that he doesn’t plan to change the program much other than improving the defense.

“Coach Whit and I ran a lot of the same defense and I will add more types of defense in which the guys are accustomed to,” he said. “Coach Whit was like a mentor and a big brother to me. We’ve been through tough times and some good times that formed that family feel. I will definitely call and pluck his brain for some information.”

German says he plans to have the team in top shape before the new season rolls around.

“The great thing about coaching at a 1A school is that many of our guys will play multiple sports that will assist in their conditioning,” he said. “Basketball is allotted some time over the summer to do some things and I plan to take full advantage of that time for conditioning, weight lifting, and going over drills to help us all.

“It’s also a catch-22,” he continued, “because they are playing other sports and we lose some time to work with them. But our guys usually catch on quick and it’s not much of a problem.”

German said he was thankful for the opportunity and grateful to God, the administration, and to Coach Whit for his guidance.

“I’ve learned a lot from him and will use it all in the future,” he said.

“The community and fans have been very supportive of this change and I’m very appreciative of it all. My phone hasn’t stopped ringing and buzzing with messages from area coaches, former players, and fans,” he said. “I am truly blessed to be in this position and will take full advantage of this opportunity that has been given to me.”

Every immigrant who comes here should be required within five years to learn English or leave the country.
Theodore Roosevelt
The most important single ingredient in the formula of success is knowing how to get along with people.
Theodore Roosevelt
+81
°
F
H: +81°
L: +58°
Dillon
See 7-Day Forecast