By Betsy Finklea
The Long Trail Home—that’s the journey that Matt Littrell, a former Marine infantryman, is making as he travels from Camp Lejeune, NC to Camp Pendleton, CA on horseback as he raises money for the Semper Fi fund. 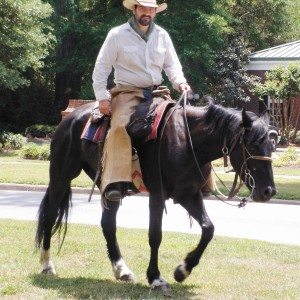 Littrell said he doesn’t know how he decided to make the ride, it just came to him.
Littrell said when they come home, veterans have a tough time adjusting. Littrell said he spent a long night at the kitchen table with a pistol  more than a year ago contemplating whether to use it on himself, but he didn’t do it, and he wasn’t sure why.
Littrell said this ride that he is now on picked him, and he worked out the details.
Littrell started the ride on May 1st and expects his 2,700 mile ride through 10 states to last about eight months. He travels about 20 miles a day.
Accompanying Littrell is a family friend, Raymond, who wanted to come along for the ride. 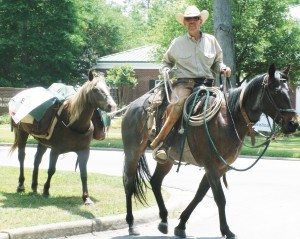 Littrell is riding a BLM Mustang that was born wild in Wyoming. He said the horse is”something special” to him. Littrell said that a mustang is not your standard quarter horse. He said that they “have to fight for their survival,”  and as a veteran of two tours to Iraq, he can identify with this. He said this is what he and his “brothers” (fellow soldiers) faced every day overseas. It was live or die.
Littrell said working with the horses really helps bring him down. He said the horses have taught him to come down and relax and have given him confidence that everything is okay. He said when soldiers come home they often feel completely alone because they are not with their brothers anymore.
Littrell said his horse lets him know when he slips. He said one can’t lie to the horse and the horse senses his body language and attitude changes. He said one has to be confident and act accordingly.
Littrell, who is from Colorado, said riding to the Marine base where he was stationed in Camp Pendleton, Colorado is going home. He said it’s where he spent the best and worst years of his life. He said a lot of soldiers are still in that “hellhole” and that is why he calls his ride, the Long Trail Home, because he is riding every day to get there.
Littrell has three horses on this journey—his Mustang named Crow, Raymond’s horse named Tequila Sheila, and a pack horse. Littrell said he named his horse Crow because there are so many different Native American and Viking legends about this mythically powerful bird. He said the horse is kind of like his spirit guide and has taught him more than any person  about so many things. He said the horse embodies so much about honesty and about what you see is what you get. Littrell said the world needs more cowboys from the Bijou Basin in Colorado.
Littrell said the horses earn everything they get, and the veterans have earned help, and it’s help that, in his opinion, they are not getting. He said soldiers fight and give up the best years of their lives.
He said places have been established to help veterans, and they are not living up to the job. He said veterans are treated like second class citizens, and people turn their backs on them. He said every day we are losing 22 veterans to suicide.  Littrell said only about half of all states even keep records of veteran suicides. He said he is sick of seeing his brothers dying for no reason. He said the people who should be getting help are not getting it, and it’s not right.
Littrell said veterans need to know that people still care and that they are not forgotten.
Littrell said that everyone he has talked to on the ride so far agrees that there is a problem and a need. He said the support he has gotten has been overwhelming.
Littrell said he has no doubts that he doing what he is supposed to be doing by taking this ride, and at the end, he will go home and go back to work.
“I just want to go home,” said Littrell, “and after this ride, I’ll be home.”
*
If you would like to follow Littrell’s journey or make a donation towards his $7 million fundraising goal on his behalf to the Semper Fi Fund, please visit Littrell’s page on Facebook®, The Long Trail Home.