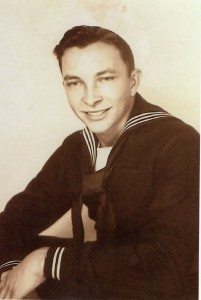 By Carley Wiggins
Thursday, November 11 is a day set aside to recognize and honor our veterans that have served our country so faithfully over the years. During this time, I usually try to write something about the men and women who have served this country in so many ways.
This summer I was invited to a family reunion by Larry Brumble, a man that I was somewhat familiar with. He explained that he had an uncle that lived in Burlington, N.C., who was an avid reader of mine and the uncle wanted to meet me. When he hold me that the uncle was ninety years old, I felt like I needed to go and meet this gentleman.
My wife and I went to the Brumble reunion, which was held at Pyerian Baptist Church, it seems like we are invited to a lot of family reunions, some from families we don’t even know, but your never know where you might find a story and this was one I found a story I want to share with you. When I met Windfield Brumble, the ninety year old uncle, who looked more like seventy, and we had a nice conversation, he began to share his days in the military during World War II. Windfield enlisted in the U.S. Army Feb. 10, 1941 and spent the entire war serving his country. He was discharged July 23, 1945.
He spent a lot of time at Fort McAndrew in Newfoundland. Windfield received many metals during his time in the service, including five overseas bars. He achieved the rank of Technician Fifth Class and served with Battery B, 173rd Coast Artillery Battalion. Mr. Brumble was rewarded some months back with a trip to Washington to see the World War II Wall. He was even provided with a chaperone, his son to travel with him. He said that this was perhaps the most memorable trip he has ever taken.
I also discovered that there were three other brothers in this family that had served their country in the military.  Two of them were at the reunion. The second brother I want to mention is Walker Brumble, the father of Larry, whom I mentioned above.
Walker enlisted in the U.S. Army in Dec. 1942 and was discharged on Sept. 9, 1945. He received training at Camp Phillips, Kansas, Camp Forest, TN and Camp McCain, MS. He left for overseas duty in July, 1944 and saw action in France, Belgium and Germany. Walker came ashore three days after D-Day at Normandy. He served under the command of General Patton. Walker was wounded at the Battle of the Bulge, for which he was awarded the Purple Heart. Walker G. Brumble passed away in 1982 and is buried at Magnolia Cemetery. The third brother we will mention is Douglas Brumble. [slide] Doug, as he is known served in the U.S. Navy. Doug is now in his eighties, but seems to be in pretty good health. Doug and his wife, Lois live at Linkside near Dillon. Doug Brumble entered the Navy in December of 1944. He was discharged in March of 1948. He attended basic training for ten weeks at Bainbridge, MD. He then went to engineering school in Norfolk, VA. Doug operated one of the main engines on a destroyer; he served in the Gulf of Mexico, the Mediterranean for nine months and the North Atlantic for three months. The last Brumble brother we will mention is Horace Brumble.
Horace, the youngest of the four brothers enlisted in the U.S. Army August 23, 1950 and was discharged on August 13, 1953.
Horace did his basic training at Fort Jackson, S.C., and nine months of advanced training at Fort Bliss, Texas. He was assigned to the 67th anti-aircraft Battalion and send to Germany.
He served in what was called occupation troops and was assigned to three different locations while in Germany.
As I write this story, and consider these four brothers who served their country, they may not have become high ranking officers or national heroes, but these men like so many others in time were what I consider the “backbone” of our military. They had a job to do and they did it well, and I realize that there have been many families that brothers and sisters have served their country and helped to keep us free.
There are young men and women serving in Afghanistan and Iraq today who may see the sun rise, but may not see it set.
I thank God for America and I also thank him for our veterans who have laid their lives on the line many times so we here in the LAND OF THE FREE AND THE HOME OF THE BRAVE could maintain our freedom.
Next time you see a veteran, tell them how much you appreciate them and what they have done for America. © 2010 Carley Wiggins